They communicate like this with other dogs, but also with humans and other animals.

The body language is quite a simple language because there are only limited variations what a dog can do with his body. Despite that it can be relatively hard for humans to read. Although some signs or gestures mean one thing, a dog can use it combined with other signs to tell something else like tell other dog to calm down. This is why you should always look at the whole picture and the context – not just individual signs.

It’s very important for dog owners and to learn some of the basic signs and gestures.

One important group is the calming signals. Dogs use these signals to create distance. They use them when they feel uncomfortable, stressed or they want to prevent a situation from escalating. They sometimes use these signals also to calm themselves.

Dogs are born with a desire for peace and they inherit the knowledge for calming signals in their genes. Dogs always try to avoid conflicts by calming things down. This is why it’s so important to learn to look for these signals from your dog but also from other dogs. Although every dog knows how to show these signals sadly every dog doesn’t know how to read them. Or if your dog has been raised with aversive methods it might have affected your dog in a way he has become oblivious to those signals or he might have become passive. In addition, reactive dogs usually react so fast without thinking because of the adrenaline spike and then they become unable to notice these signs from other dogs.

Examples of calming and stress-related signals are:

You should learn the basics of dog body language for your family’s and dog’s sake but also for the safety of other dogs and humans. No dog bites without a warning. Before a bite occurs the dog is likely to give several calming signals and/or warnings. If the other dog or person doesn’t get the message the dog has no choice but take the matter to his own paws and bite for defence. When your dog interacts with other dogs keep an eye out - if one of them shows these signs and the other doesn’t get the message you need to intervene before the situation escalates and the dog needs to defend himself. The same goes when kids are playing with a dog - then you should be extra careful because kids like to touch and hug dogs, which most of the dogs don’t like.

Growling is not a calming signal, but dogs often growl before they bite, so I must mention it when I’m writing about dog bites.

When a dog growls, that is actually warning before biting: “stay away and you won’t get hurt”. People sometimes misunderstand growling to be a bad thing and might command their dog to stop growling and to be silent. I can tell you from my experience that you should never teach your dog not to growl, because then your dog becomes unpredictable, if he is not allowed to warn. Growling is actually a good thing, because then your dog can warn you and other dogs before things escalate.

When I started learning dog body language the calming signals were first on my agenda. When Miki yawned or flicked his tongue I always thought it over why he did it and what happened just before he did it.

Here are some pictures of Miki using calming signals. Dogs’ body language varies a bit between different breeds and different type of dogs (for example spitz type dogs vs. those that have floppy ears) but the calming signals are quite uniform.

When a dog licks his lips or nose as a calming signal, dog’s mouth is closed and the tongue just briefly flicks a lip or a nose. You can also notice the dog’s face and body being tense: 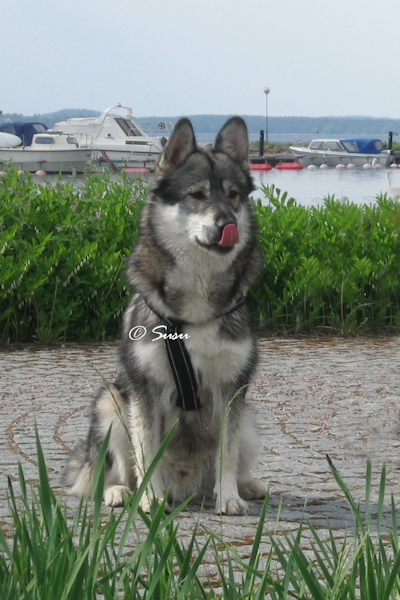 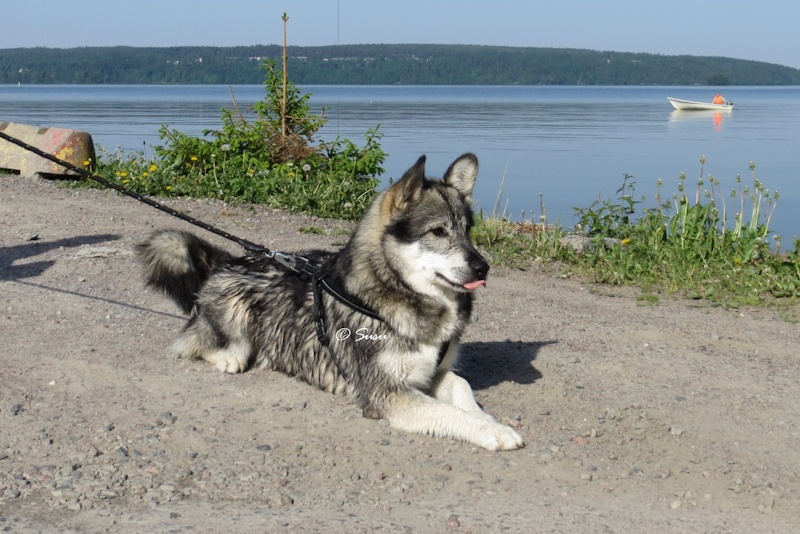 Dogs also lick their lips when you offer them food or a tasty treat and after they have finished their meal to clean up. That is not a calming signal. When dogs lick their lips when it comes to food, their mouth is usually open and the licking gestures are quite imposing and slow.

In these two pictures below you can see Miki waiting for a tasty treat and you can clearly see the difference between this food-related licking and the calming signal. He also looks happy and relaxed: 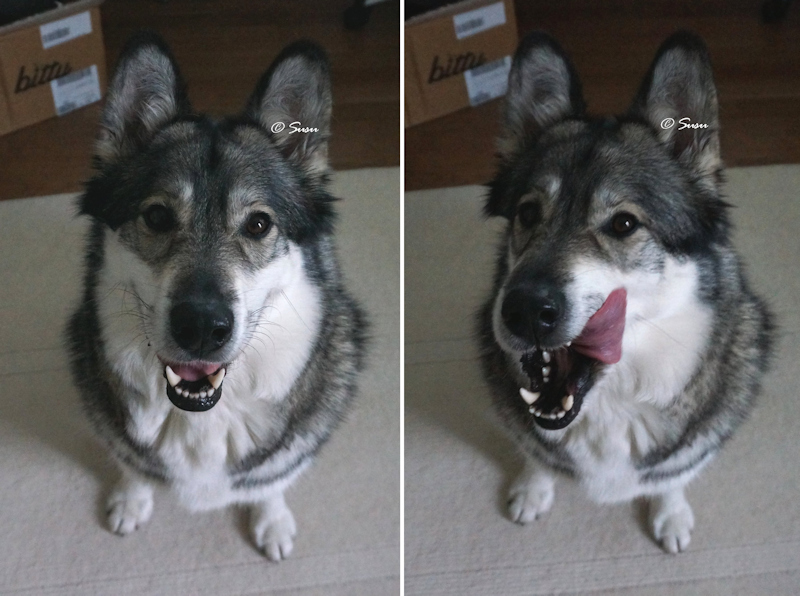 This gesture might be imposing as a dog might hang his paw in the air. It can also be very subtle gesture when one paw is slightly lifted but the toes may still touch the ground.

Here a person entered in Miki’s personal space and you can see a subtle (and fast) paw lift here. Dogs usually shake their fur when they are wet. If your dog isn’t wet and he is still shaking his fur you know that is a calming signal.

In this photo Miki got some affection from this person who also tried to hug him. Miki didn’t like that at all so he shook his fur. You can also see the subtle paw lift here. 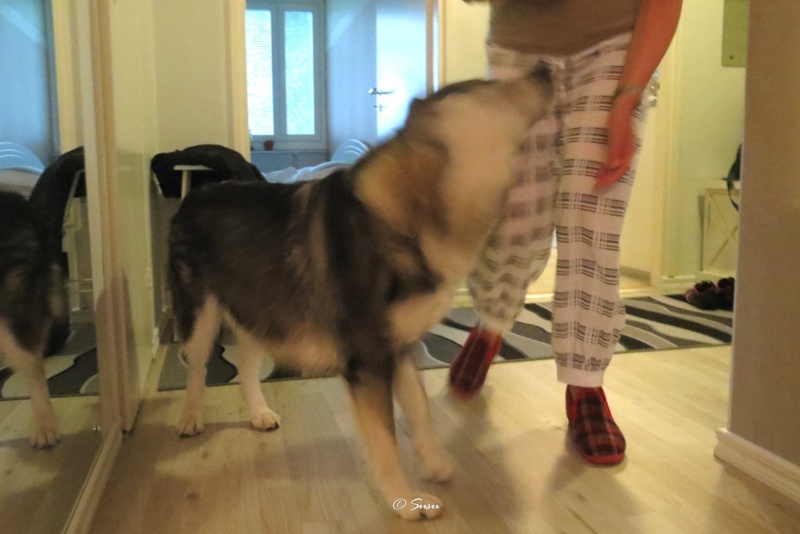 Dogs may scratch themselves if they are itchy but they can also use scratching as a calming signal. You can usually figure out if he’s really itchy or not by looking at the context. If there are any uncertainty in the air or the dog isn’t absolutely sure what he’s supposed to do you can be sure he scratches to calm things down.

This behaviour is used to calm things down because the other dog’s attention is directed to something else - scratching. And the scratcher is like saying “I’m just here minding my own business, I don’t want any trouble”.

This picture was taken at the end of one photography session. I think Miki didn’t get his reward for that sit-stay soon enough so he got a bit confused “wasn’t the sitting the thing I was asked to do - did I do something wrong? Please don’t get upset” 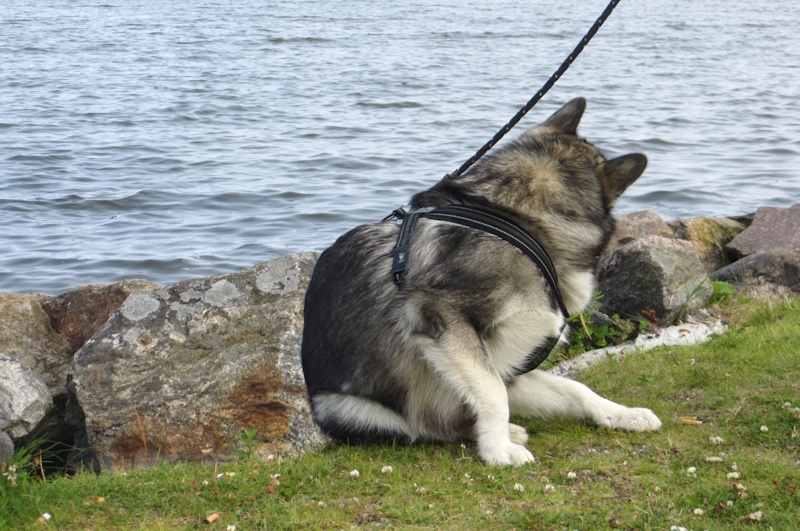 This behaviour can be difficult to see as a calming signal because most dogs sniff just about anything all the time. This also depends on the context but in the long term you will learn to spot it.

If you are peacefully walking with your dog and he stops to smell something, he has probably just found something interesting. Then again if your dog is interacting or playing with another dog and suddenly turns away and start sniffing you can be pretty sure he’s trying to calm things down like “I’m just here minding my own business, I don’t want any trouble”. Or if you ask your dog to do something and he’s unsure what you want he may start sniffing around.

This picture was taken as I was photographing Miki and I think I didn’t treat him soon enough for the sit-stay so he got frustrated or confused and started sniffing. You can also notice that he turned his head away from me. 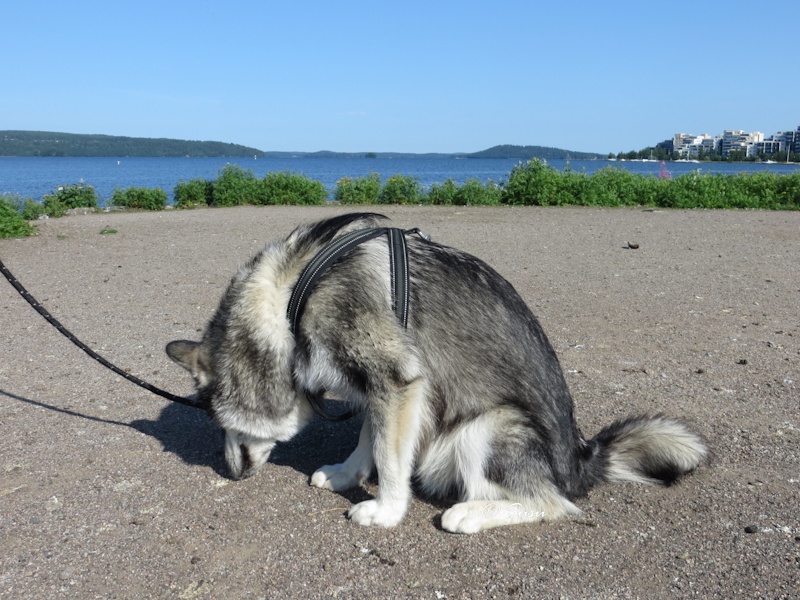 Dogs pant when they are hot. If you know your dog isn’t hot he’s most likely panting because of stress.

If you can’t tell if your dog is hot or not you can again look at the context. If your dog shows any other calming signals or stress symptoms or his tongue is rigid or rolled as he pants you know he’s stressed out.

In these pictures below Miki has chased a rabbit and he’s stressed out because he’s on a leash and can’t catch the rabbit. The tight leash increases his stress levels. 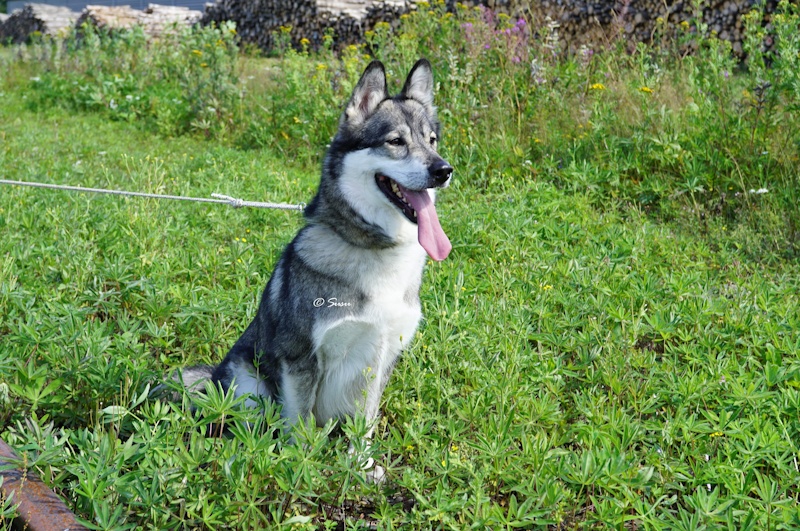 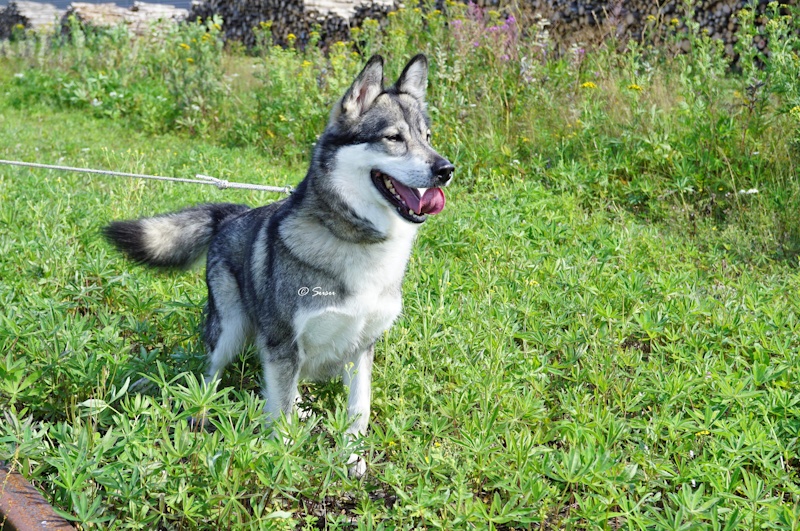 If your dog is just hot he’s more calm and happy and his tongue is also relaxed. 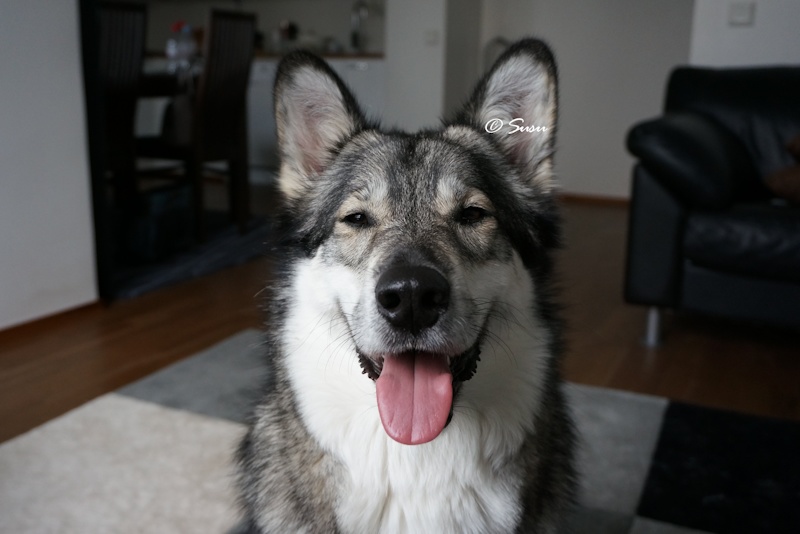 Dogs seldom yawn because they are tired. More often they yawn to relieve some stress.

Here you can see Miki yawning because of stress. 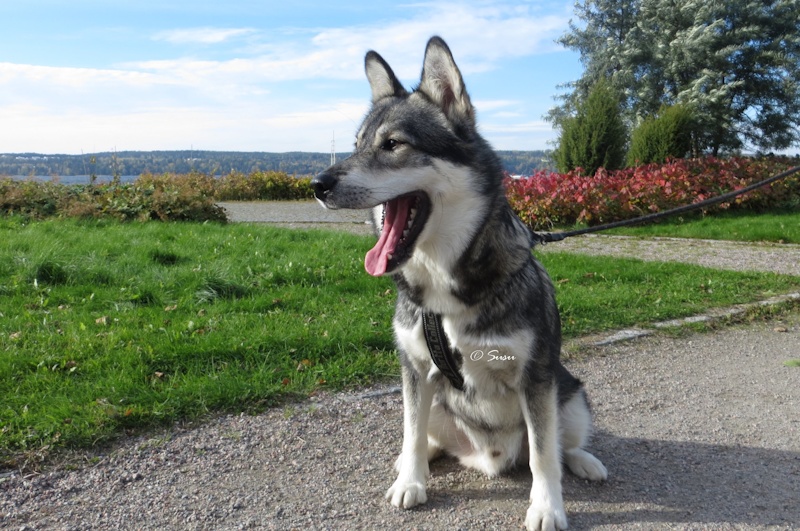 And here he most likely yawns because he is tired because he went to sleep. 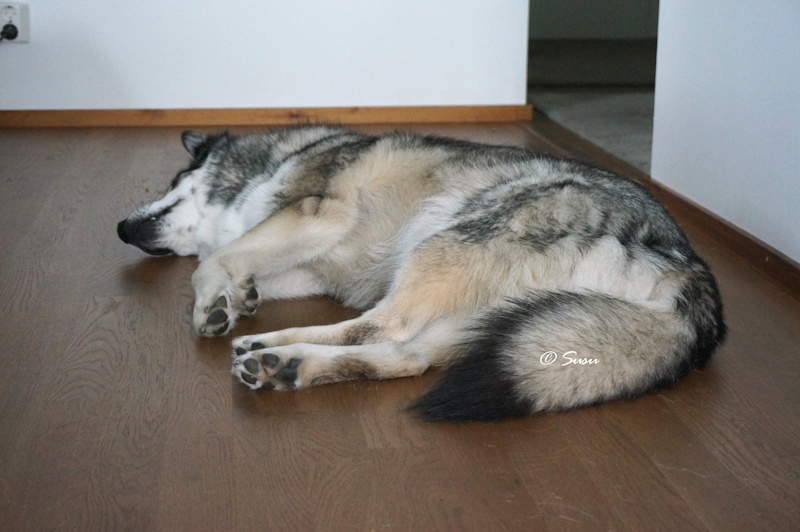 Dogs turn their heads all the time to avoid conflict. Polite dogs don’t ever stare directly into other dogs’ eyes. When a dog looks/stares other dog in the eyes that means he is either guarding something, warning the other dog or he is challenging the other dog.

Dogs don’t ever walk strait towards each other for the same reason. When a dog is tied to a leash and being walked towards oncoming dogs there can occur fights just for “misunderstanding” the other dog’s body language. How would you feel if somebody was running towards you with a knife in his hand?

Here are a few slides where you can see Miki using several calming signals.

I think Miki’s patience run out here and he offered me a head turn followed by yawning. 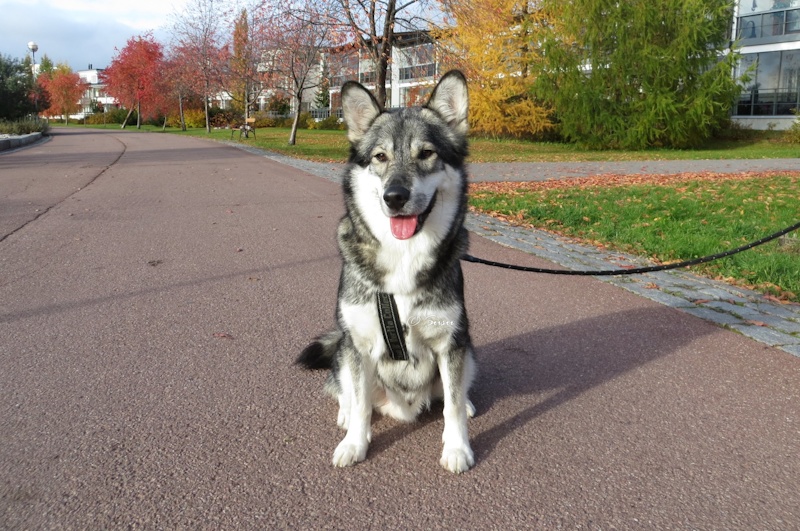 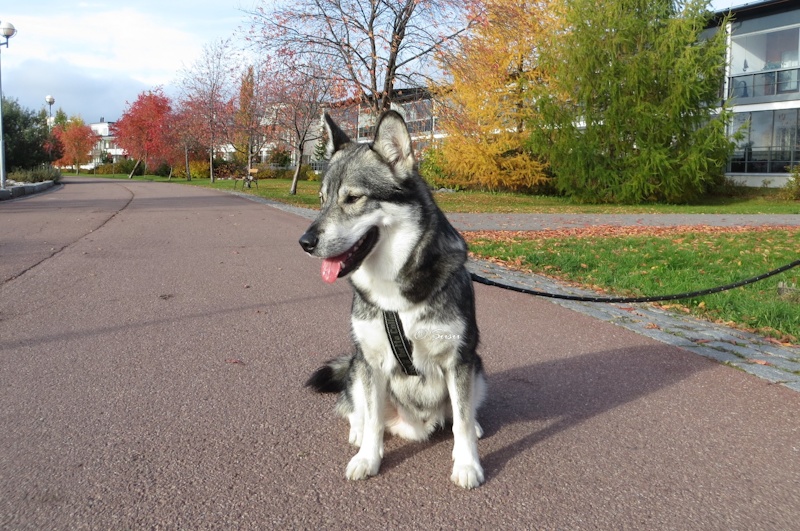 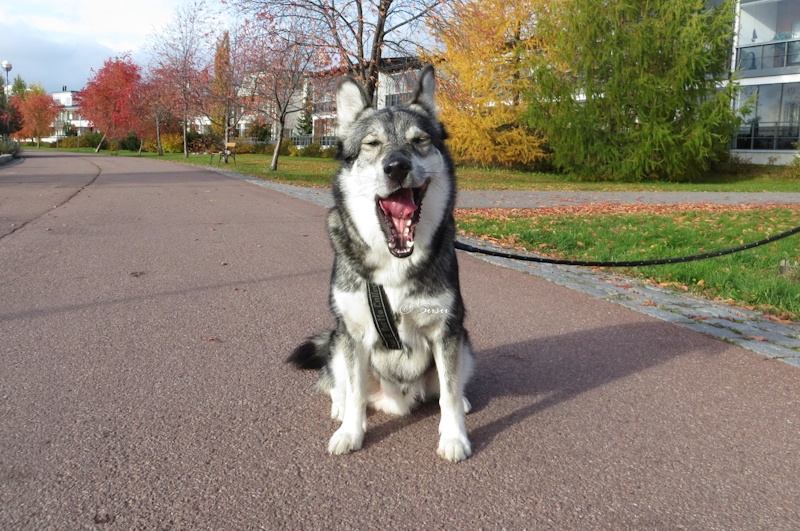 Here is a similar situation. First Miki turned his head away and yawned followed by a tongue flick and squinted eyes. 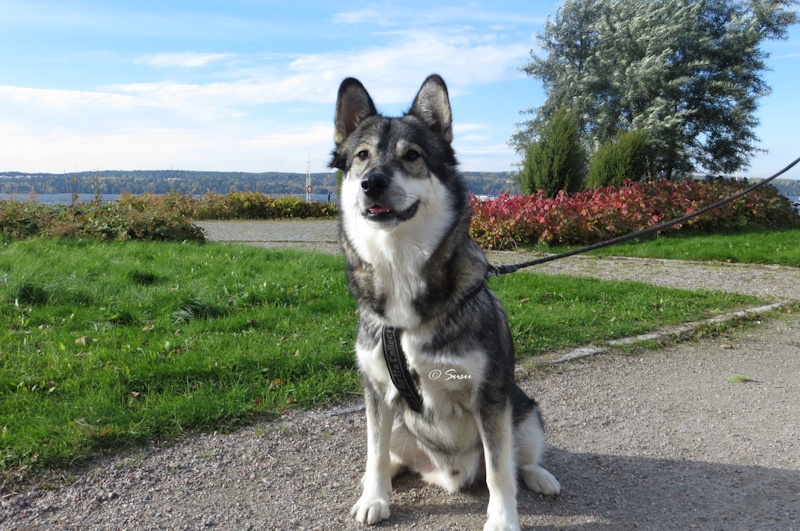 Yet again a similar situation where Miki offered the head turn and yawning followed by a tongue flick and squinted eyes. 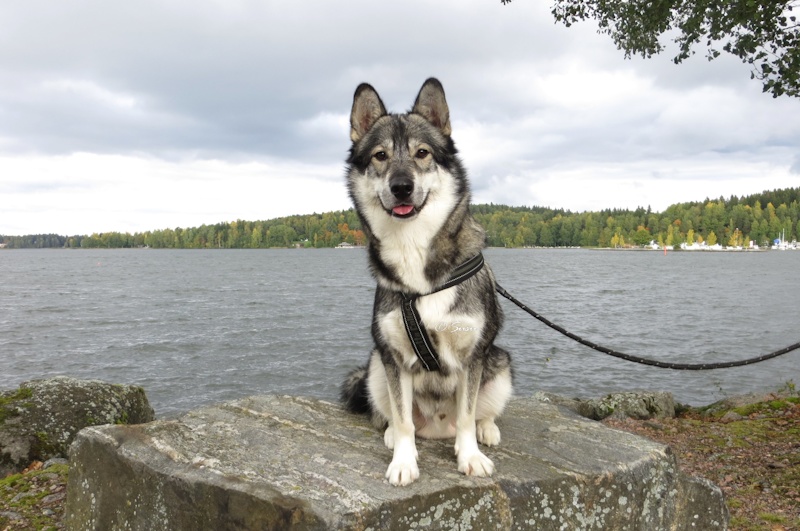 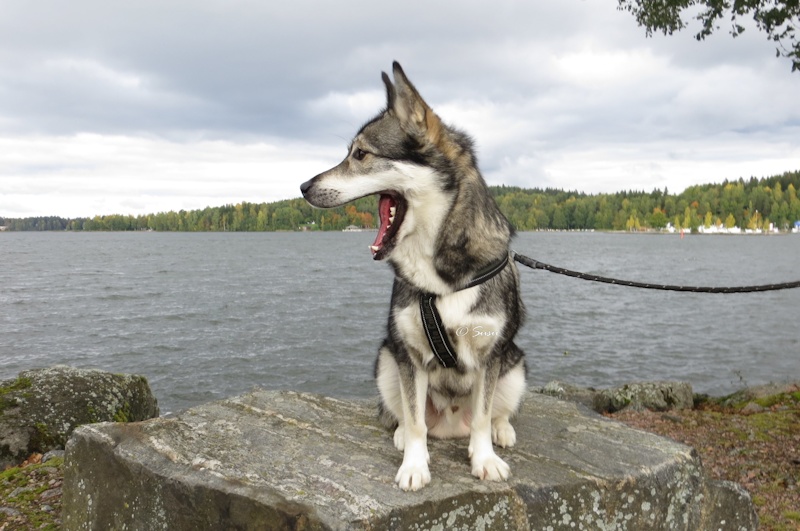 In this photographing session I took some close-ups of Miki’s face, so I was in Miki’s personal space with my camera. 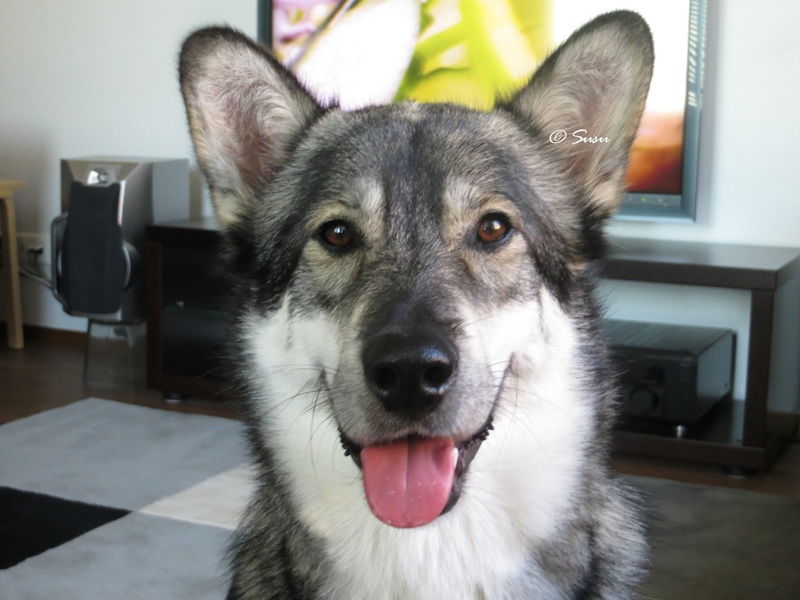 First he looked away with a head turn. Then he glanced back at me and realized I was still shooting with my camera. 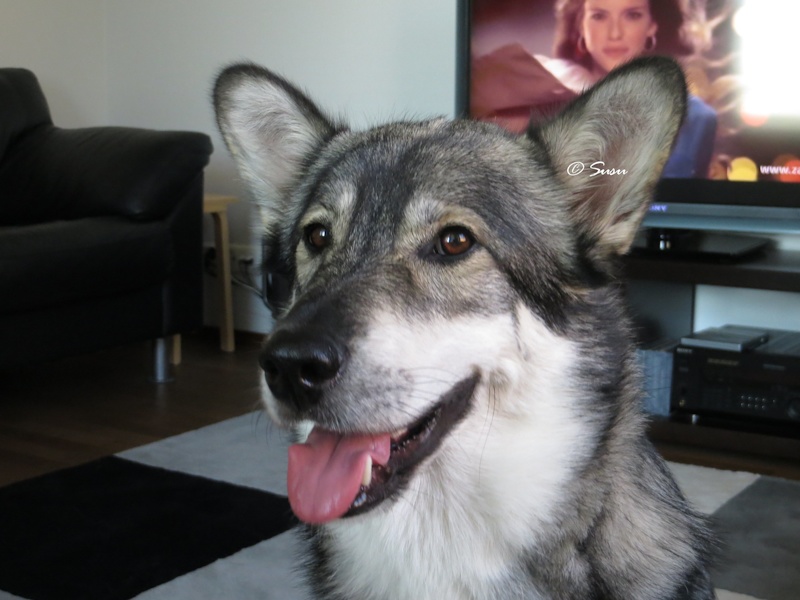 When I clearly didn’t get the first clue that I was too close, Miki played a second card and yawned. 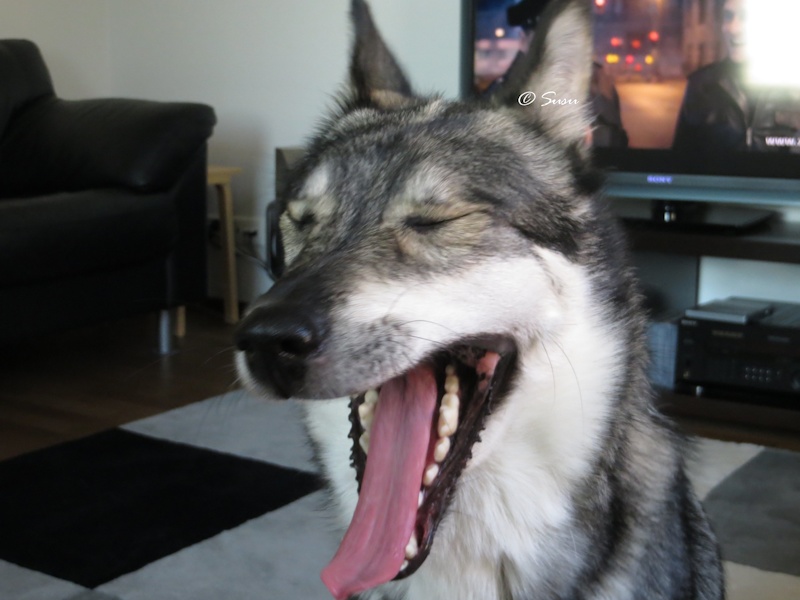 Dogs in general don’t like when someone leans over them. And they REALLY don’t like to be hugged. Miki is no exception.

In this picture you can see Miki got nervous when he was being leaned over. He flicked his tongue and you can clearly see the whale eye.

As the uncomfortable situation continued, Miki lifted his paw. 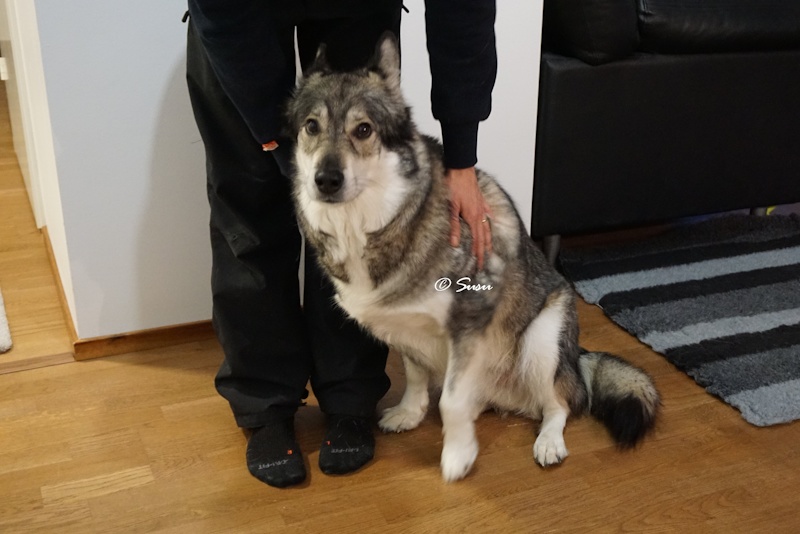 As this person still didn’t get the message he lifted his paw once more.

In these pictures you can see me trying to hug Miki and leaning over him so that you can see how much dogs really hate this. Dogs show all signs quite fast so it can be hard to see some of them with bare eyes. If you are wondering what your dog feels about hugging, ask somebody to film it on video. You may be surprised.

In this first picture you can see Miki turned his head away from me, yawned and his eyes were squinted. 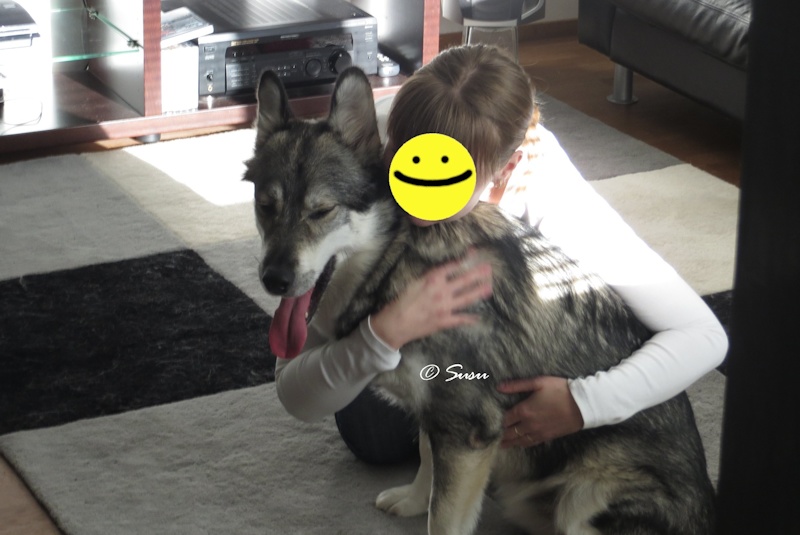 In the second picture you can see Miki’s distress continue. He turned his whole upper body away from me, lifted his paw and flicked his tongue. Miki felt very uncomfortable here. 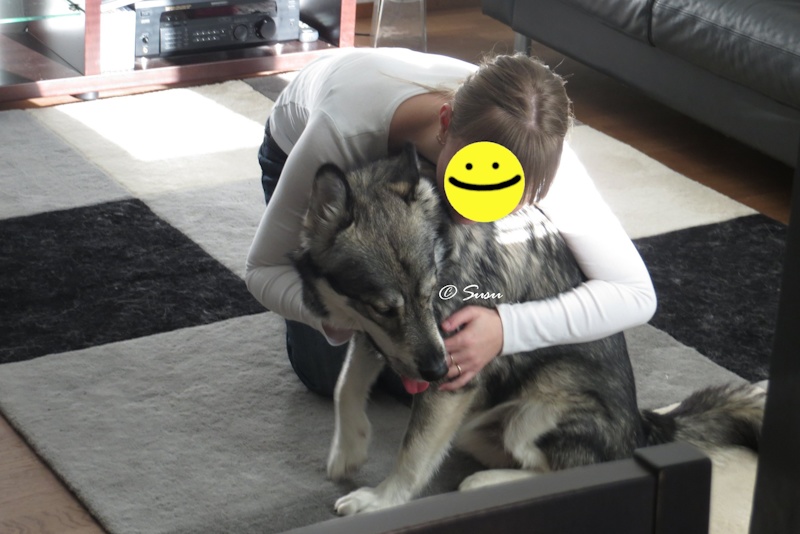 Don’t worry, Miki got some treats for withstanding these ordeals :)