Dogs use their tails diversely in communication.

People usually think a dog is always friendly when he wags his tail. This misconception is also common amongst children and that’s one of the most common reasons for children to get nipped by a dog.

Dogs do wag their tails when they are happy, but they wag for multiple other reasons as well. Dogs wag also when they give a warning: Do not come any closer! And if you get closer you might get nipped.

Different wags are quite easy to learn. For the safety of your family and for others it’s best to learn the meanings. When you can read the different wags you can then read your dog like an open book - and be able to avoid things going south. In this post we examine three different aspects, height of the tail, orientation and speed of the wag.

Height of the tail

You can’t compare tails’ height between different dog breeds because every breed carries their tail differently when it’s in a neutral position. What you need to do is compare the height within the breed - is the tail higher or lower compared to the neutral tail carriage of that breed?

Friendly and relaxed tail looks somewhat like this, the base of the tail is parallel to the dogs back or a little lower: 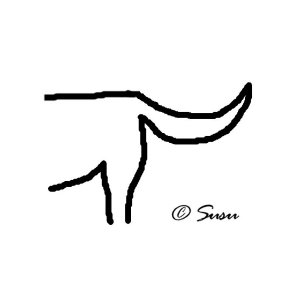 Some breeds may just hang their tail when it’s relaxed, but the tip of the tail points outwards: Miki has a curled tail, so he’s friendly when the tail is curled over his back: 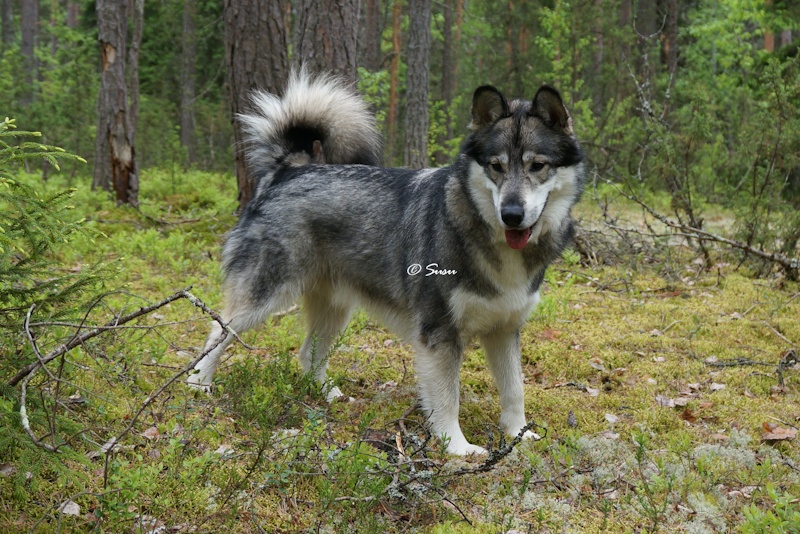 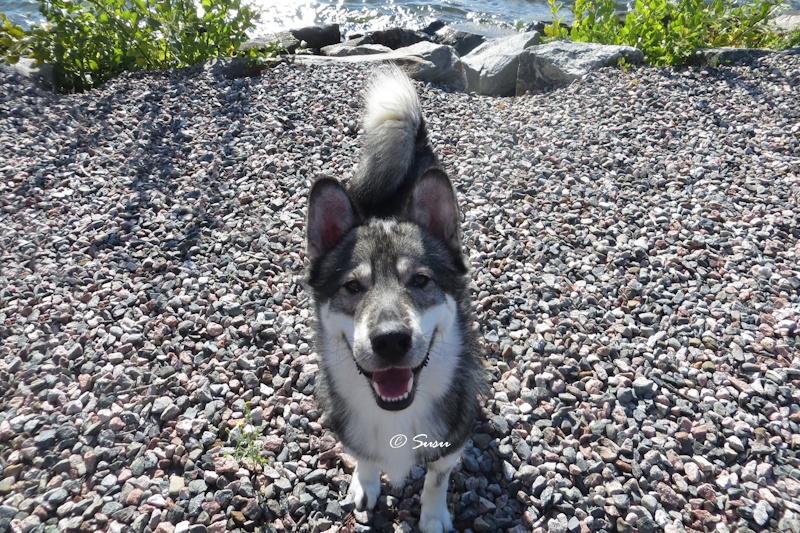 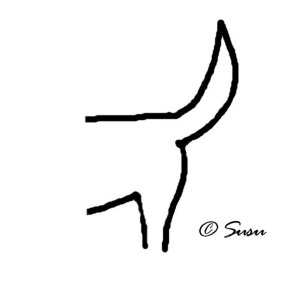 Dogs move their tails up and down. In fact it’s adrenaline that moves the tail in general. When the tail moves upwards it can be a sign of alertness, self confidence, asserting a leading position, aggression, agitation, excitement or it can be a warning to stay away.

In this photo Miki is a puppy. He’s having fun but he’s (way too) excited as he has decided to run a bit. You can tell he’s just excited although his tail is vertical because his ears are back, mouth is open and the tongue seems quite relaxed. This is not a warning of any kind. 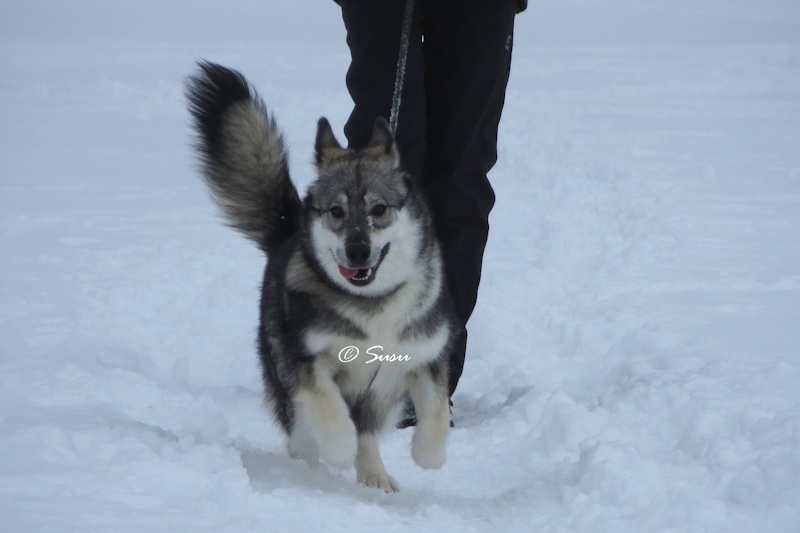 In this photo Miki’s holding his tail vertically again. You can clearly see he’s worried because his mouth is closed. Miki stares at the possible threat and his ears are also pointed at the same direction. Miki has even raised himself to see the possible threat better (and maybe also to make himself look as big as possible). 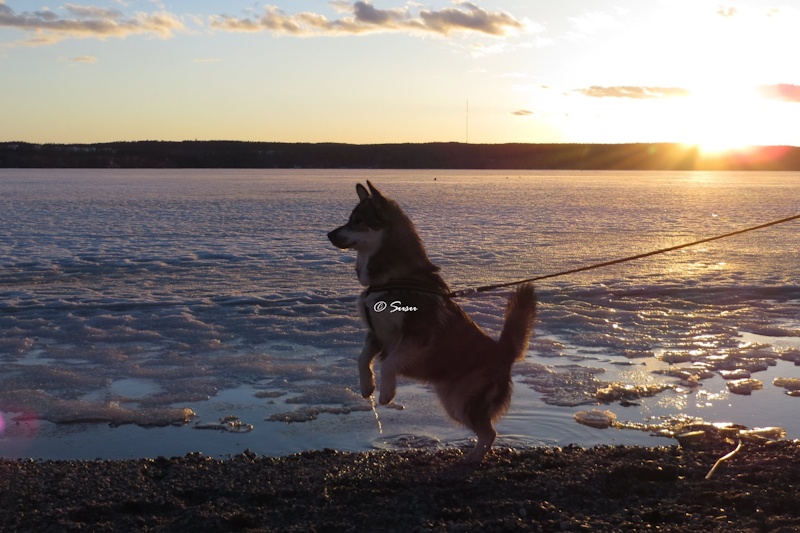 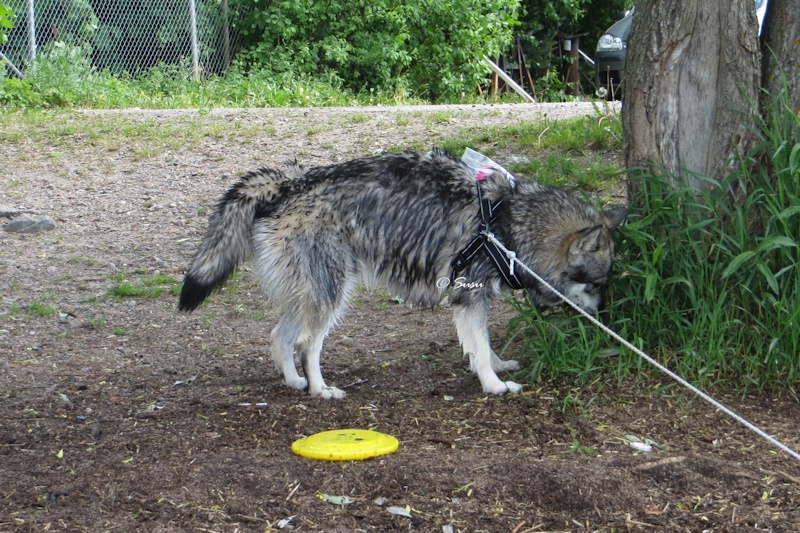 And as you can see in this photo Miki’s antenna now points to the stars above. 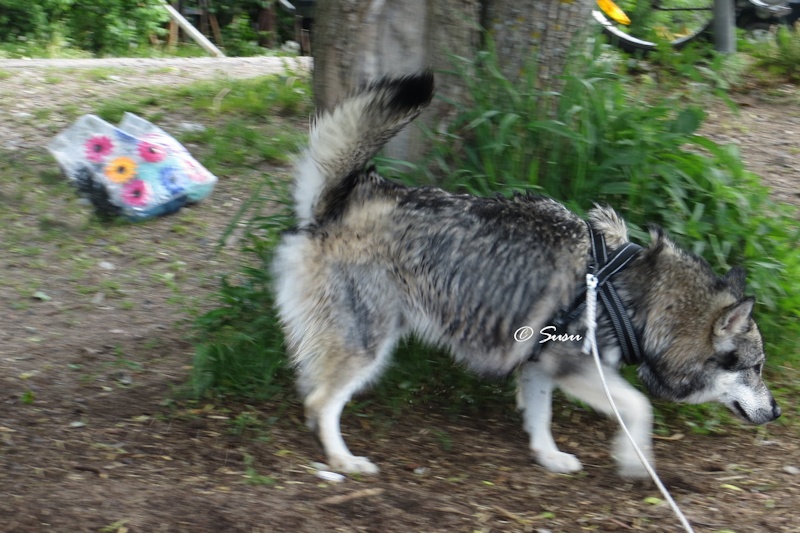 This is also a fun set of two photos. In this first picture Miki wanders in the snow sniffing and his tail is pointed downwards. Here you can see a person suddenly throws a snowball and Miki gets excited. His tail is vertical in a millisecond because of the adrenaline rush. 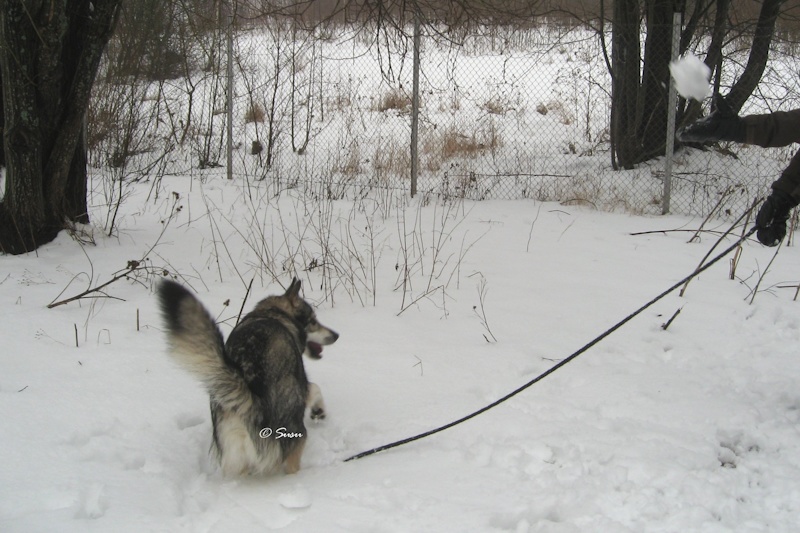 Tail between the legs

When the tail descents the excitement or agitation changes to calmness and the dog’s mind goes from leader to a follower state (and he might submit to another dog). The extremity of a low tail is when a dog puts his tail between the legs and the tip of the tail is pointing towards his stomach. The tail can also be against the dog’s belly. Then the dog is very scared and tries to protect his genitals and make himself look as small as possible “Don’t hurt me I’m just a small harmless dog”. You can also see that the dog’s back is rounded as the dog lowers his butt with the tail. 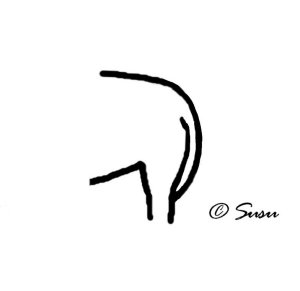 For example there once was a time when Miki was a puppy and we were on our daily walk. An older lady dog sitted a Great Dane and couldn’t retain the dog as he lunged towards Miki - what a surprise. Miki put his tail against his belly and made himself as small as he ever could. Finally the lady retained her dog and Miki got away with no physical injuries (let’s not talk about the mental injuries caused by that accident in this post).

The orientation of the wag

If you haven’t ever paid a close attention to your dogs wag you might think that the tail just wags behind the dog. That’s not true.

Here are some pictures to show you the difference between a right and a left orientating wags. Notice that the tail might cross the midpoint but the wag still emphasizes either to the right or the left.

Tail wags to the right, the dog is feeling positive emotions: 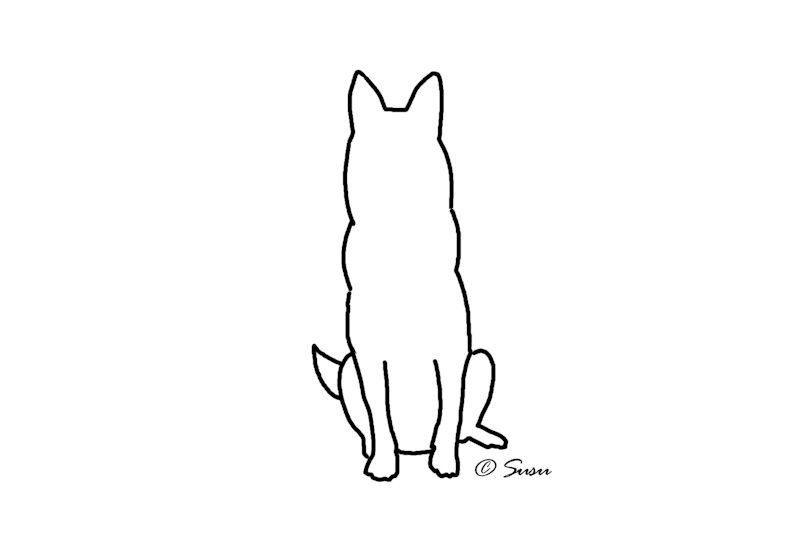 Tail wags to the left, the dog is feeling negative emotions: 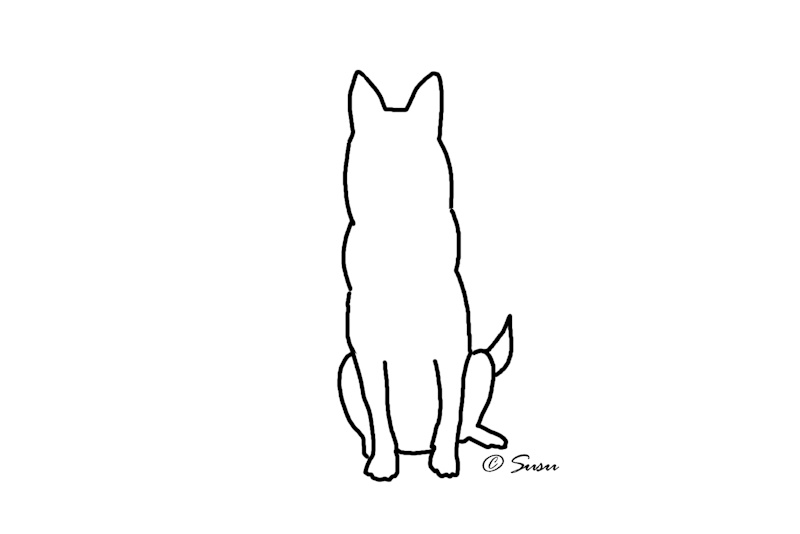 To the right, Miki’s mouth is closed because he concentrates on a ball I’m holding: 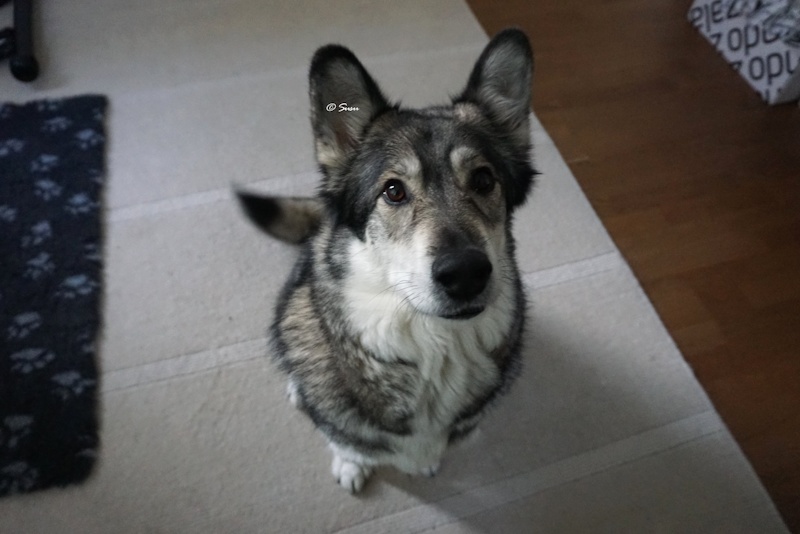 To the left, why can’t I get the ball already? 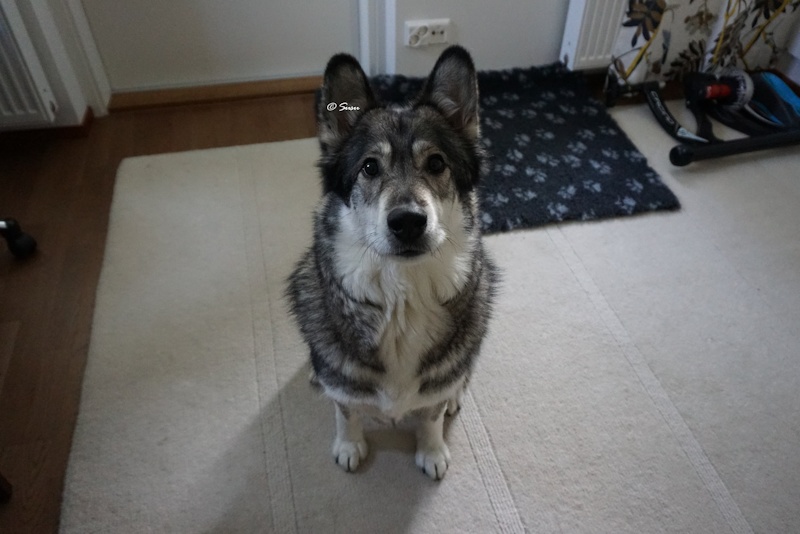 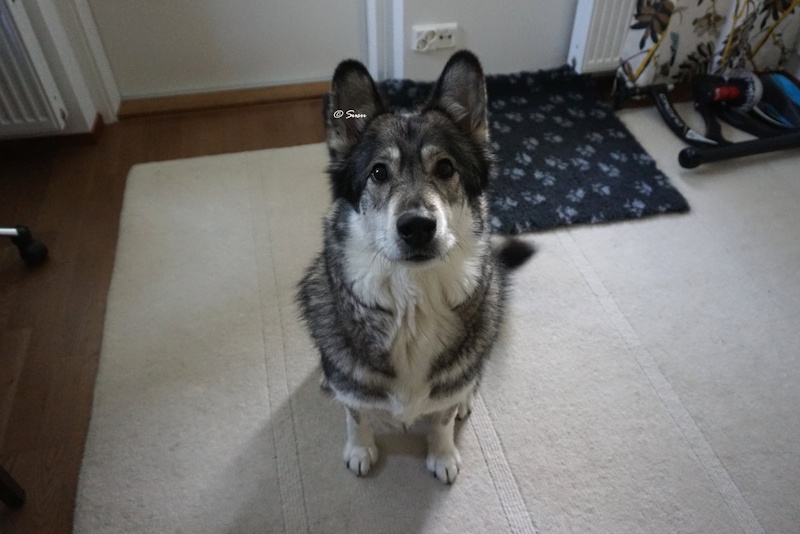 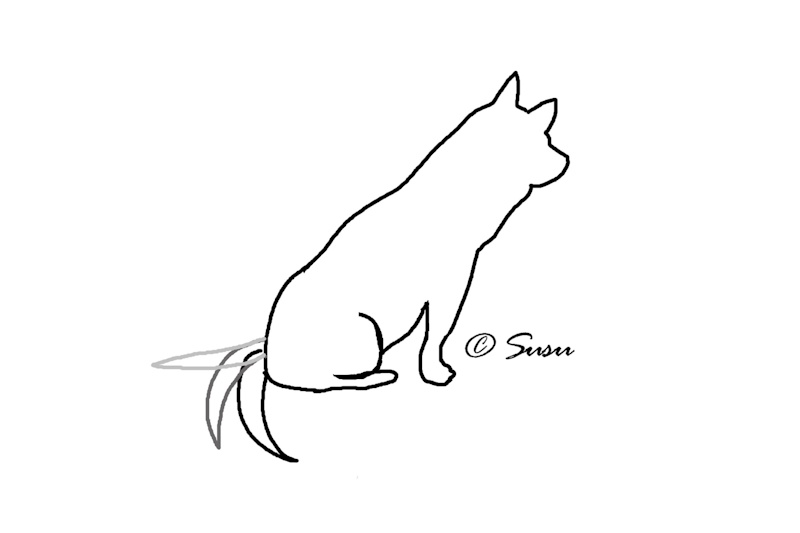 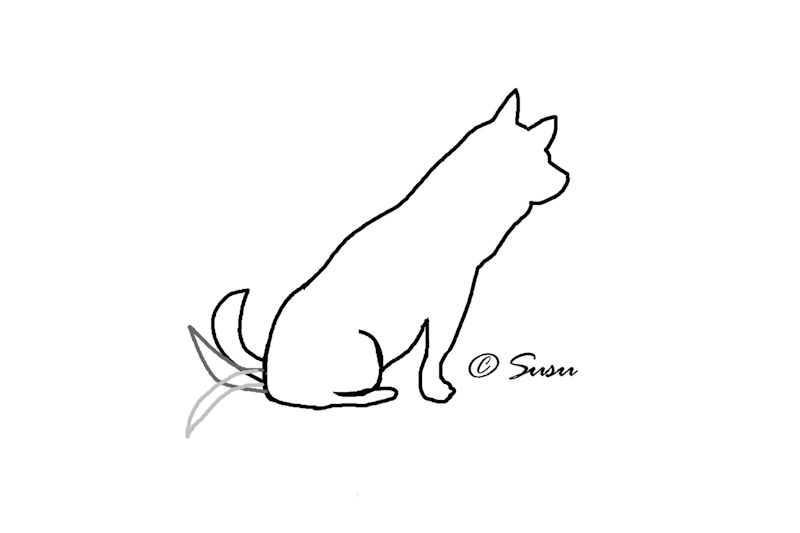 Right, notice the open and relaxed mouth and the loosely hanging tongue: 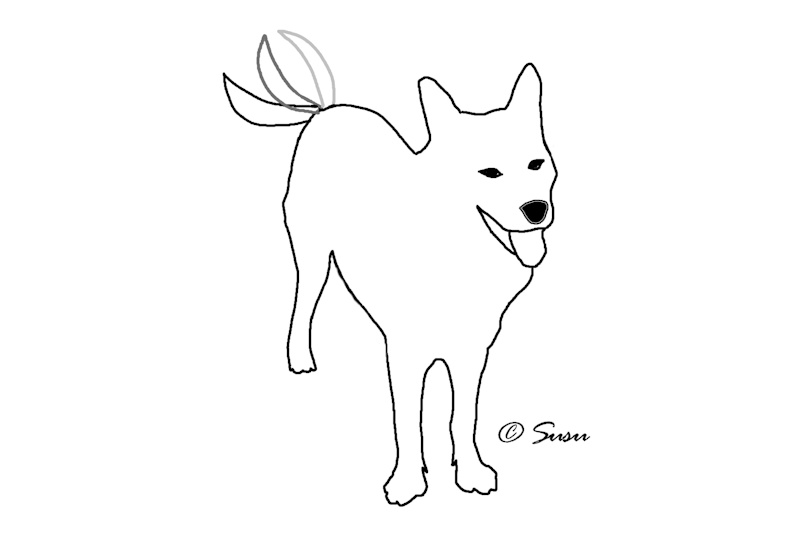 Left, this dog has more serious look on his face, his mouth is closed: 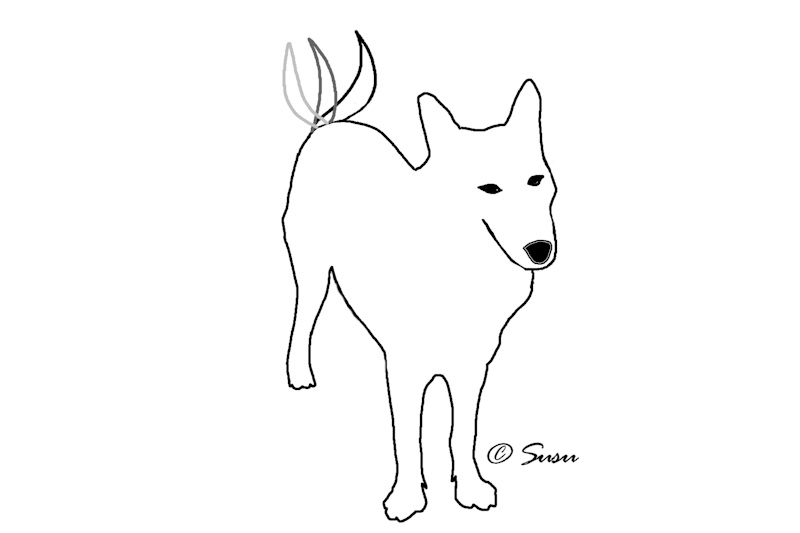 This was taken in a photography session and I had asked Miki to sit. 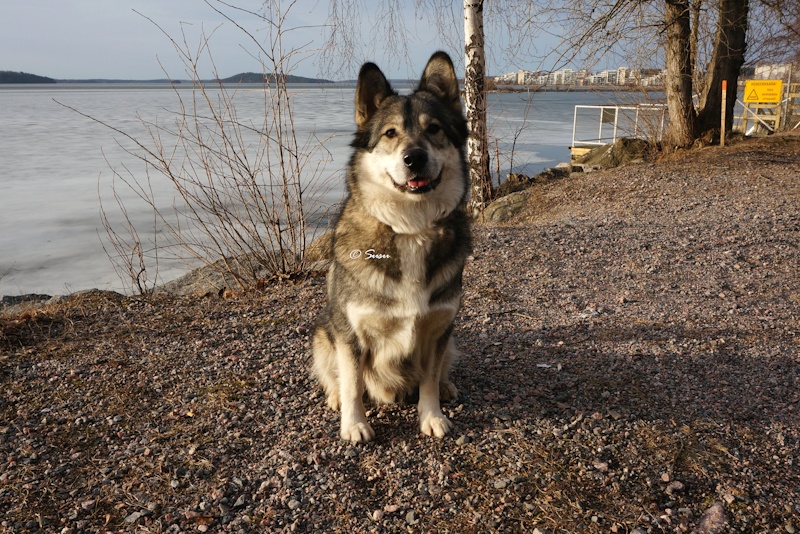 When I marked the right behaviour and gave him a permission to come to get a reward, his tail swinged to the right. 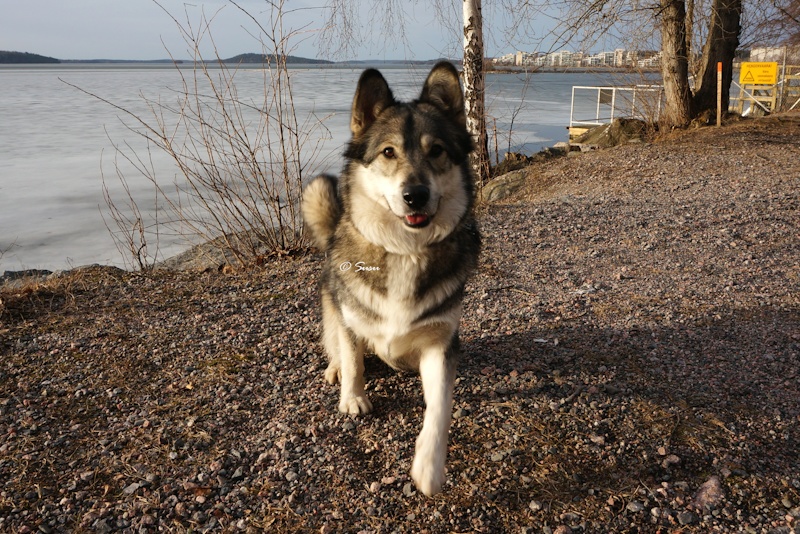 A toy has been thrown for Miki to chase. Miki’s tail is almost vertical from excitement and it swings to the right. 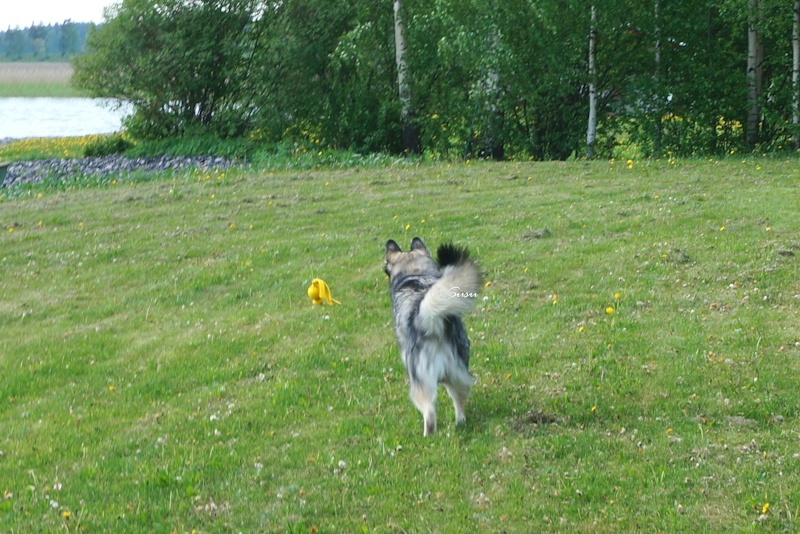 Miki isn’t afraid of the vacuum cleaner because he was socialized to it. His tail is approximately at the same level as his back so it’s quite neutral. Our vacuum cleaner has a very loud noise and Miki doesn’t like that so he swings his tail to the left. 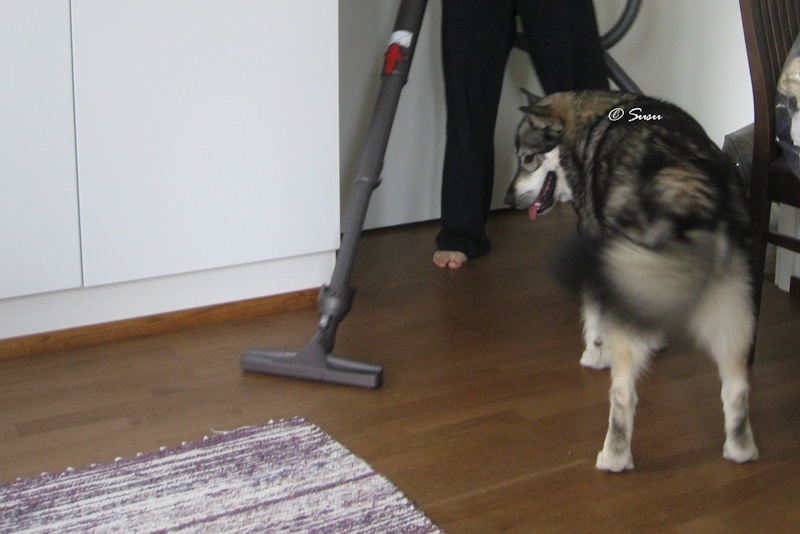 Miki decided to go and check out the melting ice and didn’t like it. His tail swings to the left. 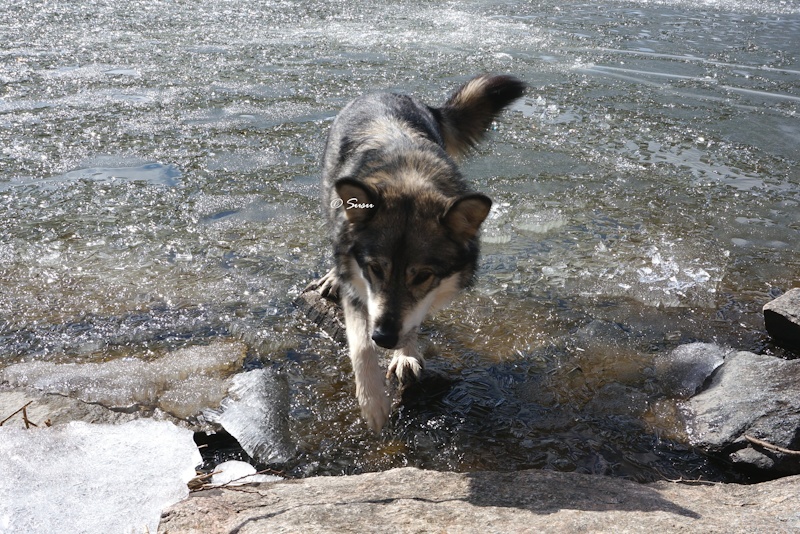 The speed of the wag

Dogs wag their tails at different speeds. The more a dog has adrenaline in his blood the more excited or agitated the dog is and so increases the speed of the wag. Dog is usually happy when they wag their tail at medium speed and the tail is parallel to the dog’s back or a little lower.

Friendly and happy dog can wag his tail also rapidly, but then the motion of the wag forms a figure eight and the wag is grandiloquent. The motion is so grandiloquent that the dog’s butt wags with the tail :)

In this picture Miki is still a puppy and he is very happy and excited about a toy. His tail wags in a figure eight. 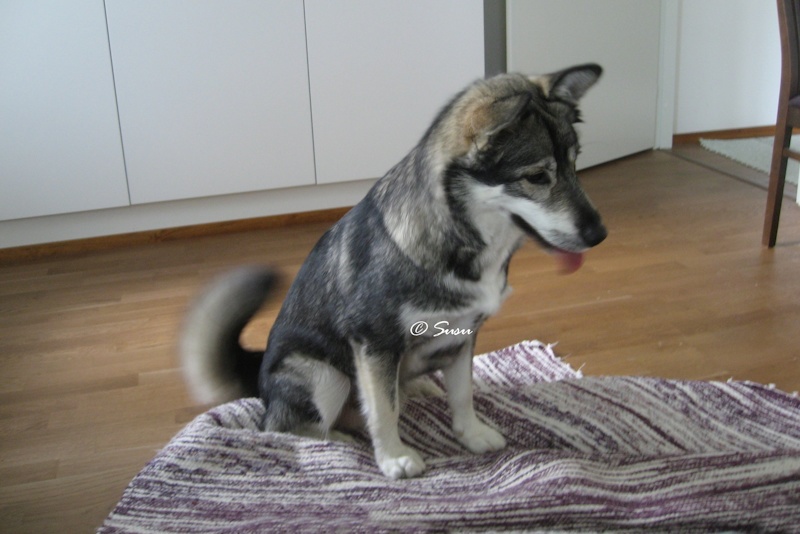 If the tail is moving slowly and the tail (and the dog) looks stiff the dog is like waving a red flag: Don’t come any closer. You shouldn’t approach a dog when he’s in that state. If you do he might nip you to make a point. Or if you are walking with your dog and you see an oncoming dog wag his tail like this - stay away or he might nip your dog.

Dogs communicate with each other and with humans with their whole body. Their tail is still a very important communicating device because other dogs can see it from far away.

Dogs need their tails. In addition that they communicate with it they use it also for balancing: 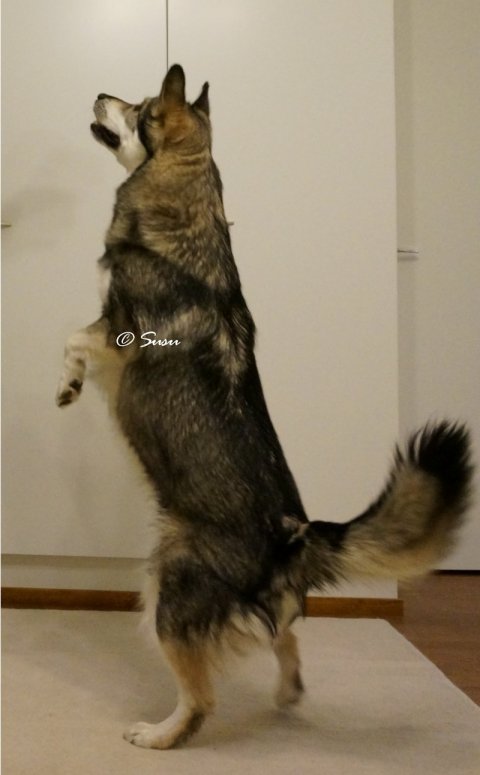 One of people’s greatest sins is breeding tailless or very short tailed dogs. The same goes with tail docking. I’m so grateful that it’s now illegal in Finland but I’m still sad because most of the countries still allow it.

If a dog’s tail is docked (or bred to be short or non-existent) it’s basically the same thing as cutting a tongue off from a person.

I’m fine with the concept that you rescue a dog from horrible conditions abroad and the dog have had his tail docked. You just can’t do anything about it. But what makes me furious is when someone buys a dog from abroad on purpose and the dog’s tail is docked before the dog is shipped to a country where the operation is illegal. I think these people deserve to be treated as they have treated their own dogs.

Other dogs might also read tailless dogs incorrectly. They are at a disadvantage when they interact with other dogs. A dog that has no tail can be seen from other dogs’ point of view like the dog is hiding his tail between his legs and he can get attacked by other dogs because of that misunderstanding. 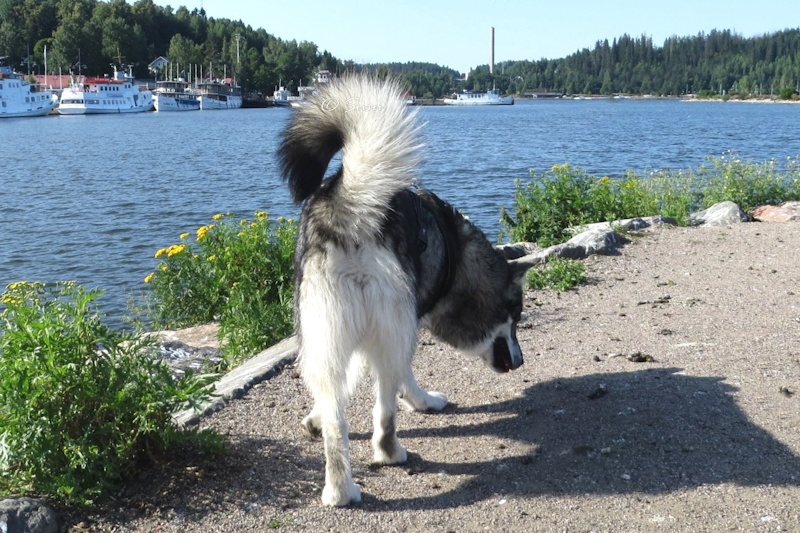