Rules may sound a bit boring, but some ground rules are necessary for peaceful coexistence.

Ditch the word NO!

When we are talking about rules, some of us may associate it with punishing the dog or shouting “NO!” when the dog is doing something wrong. This post isn’t about that at all.

On the contrary, this post is about creating invisible boundaries and rules. The dog knows what is right (he gets what he wants and everybody is comfortable) and what is wrong (he don’t get what he wants).

Many of us thinks “How can I say no to that cute furball?” well - you shouldn’t. You should avoid saying (and shouting) “no!” as much as you can, because the word no doesn’t teach anything to the dog. What you should do instead is to teach the right way.

This is one example how the word “no” doesn’t teach anybody anything. A person goes to a new job in brand new red blouse. The boss isn’t happy and says: “No, red blouses are not allowed here. Next day the person wears a yellow blouse and the boss is not happy at all and says: “No, yellow blouses are not allowed here”. Next day the person ponders what the heck she should wear and puts on a blue blouse and the same thing happens again, because blue blouses are not allowed either. Everybody understands that it would’ve been fair to tell the employee before the first day, that for example only white shirts were allowed. Denial didn’t teach anything and the employee only got frustrated.

No! is also problematic, because correct timing is the key if you need to say it. If you say it even a bit afterwards, your dog will be absolutely clueless what you are shouting about. A classical example of that is a dog that has demolished the house when his owner isn’t home and when the owner returns to home he shouts NO! to the dog who is calmly greeting his owner. The rules need to be clear and simple enough, so everyone in the family knows them.

The most important thing when creating new rules is to reward your dog for the right behaviour and ignore bad/wrong behaviour (as long as it isn’t anything dangerous). This way the dog learns what pays (right behaviour) and what doesn’t (wrong behaviour). Doing so, you don’t need to teach any new behaviour, just reward him whenever he behaves correctly.

If you need to create a rule for some specific situation, you should create the rule when you are feeling good and you have time to wait a correct behaviour. In addition your dog needs to be as calm as possible. Before you teach anything, think thoroughly what is the goal you’re looking for. There are as many ways to teach as there are teachers, but keep in mind that the things you teach need to be clear and simple enough.

I’ve created dozens of rules and Miki obeys them automatically and no one has to enforce them. That’s why I found it a bit hard to tell you some examples, but here’s something: I’ve created a rule that Miki is allowed to sniff everything in our house, but he isn’t allowed to take or taste anything without a permit. He needs to sit when I put his collar on and when a door opens Miki doesn’t rush out but instead sits and waits for me to go first. Open front door doesn’t mean Miki should bolt out and by staying in while the door is open pays well. Begging for food or attention is a sure way to be left without and not begging pays well. By whining or barking he gets nothing and by being silent and calm he gets what he wants. Jumping didn’t get him any attention when he was a puppy and now he greets calmly.

When I cut the fleece for the charity snuffle mats, Miki wanted to participate and see what I’m doing. I didn’t want Miki to walk all over the fleece when I was cutting it, so I created a rule that Miki is not allowed to enter the room when there is fabric on the floor.

Here’s a couple of pictures Miki following the rule and watching from the hallway. 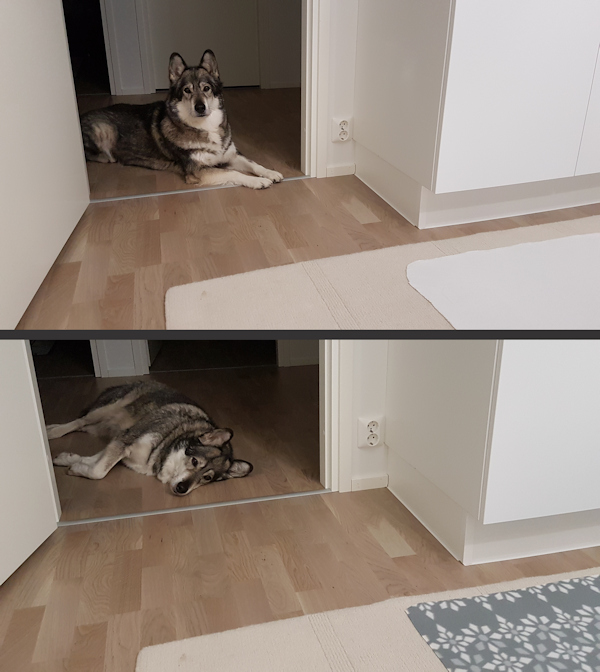 Set your dog up for success, not for failure

Before you teach anything new try to think it through beforehand. Try also to think it from your dog’s perspective and then try to create situations that will set your dog up for success, rather than failure.

For example, if you haven’t already teach your dog that your food is only yours, until then you need to take care that no food is left unattended and in a reach of your dog. That would only encourage him to fail and steal some or all of it. Or if you teach your dog to pass any food on the floor, you should only put some low value food on the floor that is relatively easy to pass.

Or if you want your dog to sit before you open the door to go out side, it’s best not to put a spiky doormat on your hallway, because who would like to sit on that?

Stupid heading, you may think - why would someone reward bad behaviour?

Dogs feel rewarded by so many different things. Even if someone is scolding a dog the dog might feel rewarded, not punished. Because dogs LOVE attention - whether the attention is good or bad. And because many dogs feel rewarded also by bad attention you might unintentionally reinforce bad behaviour.

So unfortunately a dog might think that “this (bad) behaviour gets me so much attention I need to do this more often”.

When a dog misbehaves, we humans find it VERY hard not to pay any attention. It’s written in our genes that when something happens or we hear a sound we automatically turn our gaze to the source. So even if you just take a quick glance to see what your dog is doing you just have unintentionally rewarded him.

Another thing you should pay attention to is reward exactly the behaviour you want from a dog and not reward behaviour that is less bad than usual. For example if your dog always barks and runs back and forth along the fence when people pass by the less bad behaviour could be that he stays in the porch but keeps barking.

Dogs are masters at back chaining and therefore that method is commonly used in dog training. But beware because it works excellently with bad behaviour too. If you reward a dog too soon after bad behaviour (immediately as he stops barking) the dog chains the two things together “barking+hushing done in a row equals a reward” instead of what owner wants “being quiet equals a reward”.

Is your dog getting enough attention?

Does your dog get enough attention when he behaves correctly or is he misbehaving just to get more attention?

Here is one example of a fictional dog that always have zoomies and rampage in the house. His owner is always scolding the dog when he misbehaves (literally all the time). When the dog gets tired and lays down the owner thinks that “I’m so relieved that he finally got tired and I hope he falls asleep so it’ll be peaceful for a while”. That dog has got so much attention by misbehaving and when he settles down he gets no attention at all. The worst case is if his owner gives him food/treats/toys when he misbehaves “because he stops misbehaving after he gets what he wants”. You see how this dog has full motivation to misbehave, because it has been unintentionally taught to him.

The only way to change the situation is to left the dog completely without attention when he misbehaves and reward him when he has settled down. But in this case too the back chaining must be kept in mind. If the dog is rewarded immediately when he lays down the dog learns “rampage+laying down equals reward” not “laying down equals reward”. So he should be rewarded like a minute or two after laying down. Or if possible reward him when he’s calm, before the zoomies start.

I have taught Miki to lay down calmly by having a few treats in my pocket all the time and when Miki is laying down minding his own business (but not sleeping) I randomly give him a treat reward. I give him only a few rewards a week and I have done this for years now. In the beginning however I gave him a few treats every day.

The hardest part for us humans is to follow the rules consistently. It’s easier for the dog too to live with us when he knows what is right and what is wrong.

I guarantee any dog will get confused if he’s “allowed” on the couch today because you have friends over who want to pet him but tomorrow it’s forbidden again.

If you have more than one dog, you should always be fair to all of them. By that I mean the rules need to apply to all of the dogs, not just some of them. For example if only small dogs are allowed on the couch but the large ones aren’t, it’s only going to cause envy and confusion. It’s like if you have two children who both behave well when you go shopping and then only one of them is allowed to pick a toy from a toy store and the other one is left without. That can only lead to anger and envy because it’s just unfair.

Everyone has bad days and those days you couldn’t give a damn about rules. But if you ignore the rules “just this one time because I’m so tired” your dog will be really confused next time.

When you are in a bad mood your dog will sense it too. Your dog might see you as weak instead of balanced person. He might try something forbidden especially if you have gave in at some other time you have been in a bad mood. Or he might see you as too unbalanced and unable to do right decisions and decide not to obey. On the other hand he might be so emphatic that he becomes anxious just to see you in a bad mood and unintentionally stop obeying because he’s too anxious.

Following the rules consistently is hard but the more you give in the worse he behaves. Bad behaviour turns little by little to new “normal” and nobody wants that. Create rules that are relatively easy to follow through, even those days you’re feeling tired.

Miki is one of the greediest dogs in the world and he would eat so much his stomach would explode if he’d only get a chance. We have a rule that all the food and other items in our house is ours and Miki has a right to have something only with a permit (and he can have a permit by behaving). This is quite unbelievable, but I can leave a full plate of food in the floor and Miki won’t touch it because he don’t have a permit.

Here’s some pictures where Miki is still learning to pass the food. By passing the food on the floor he always got something better. 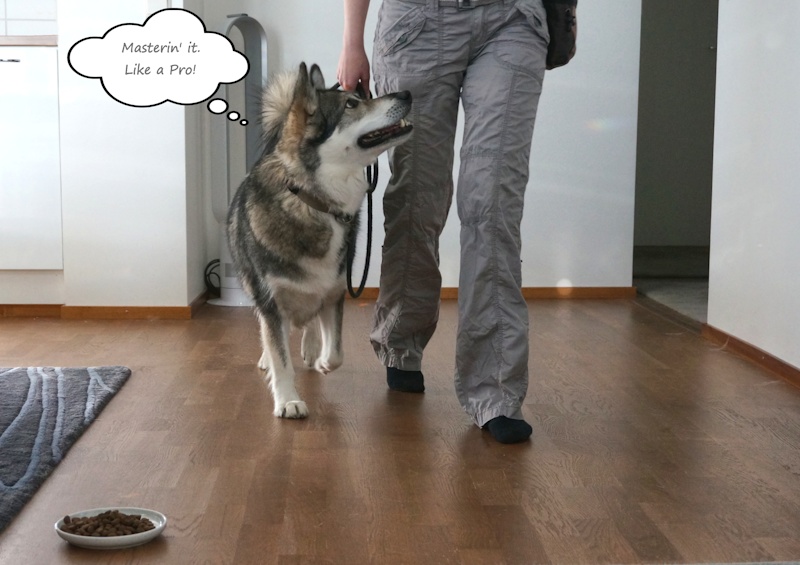