These games are quite difficult so they suit best for dogs that already have some experience with puzzle toys.

I read an article about a study made with dogs and wolves. There were 10 dogs from shelters, 10 pet dogs and 10 wolves. Each animal was given the same task; open a can with treat inside and with lid on it. And the task needed to be completed within 2 minutes in order to succeed. I tried to look up more information about the can used in the study, but they didn’t describe it.

The results were really interesting. Eight out of ten wolves succeeded in the task in the given time. Neighter of the remaining two wolves gave up, but it just took longer than two minutes to get the can open. Only one of the shelter dogs succeeded in the task, while the pet dogs didn’t even bother to try.

I was thrilled about this study. So thrilled that I needed to try this on Miki. I put a few kibble in the can (that you can see in the pictures below) and then I put the lid on. Yes, I have been “training” Miki with various tasks over time, but I hadn’t given him any cans with lids before. Although I knew that Miki is exceptionally smart dog, I was still very amazed when Miki opened the lid in just 15 seconds!

At a couple of first tries I gave Miki only one can at a time. Later on I gave him all the 13 cans that I had and it took Miki between 2 seconds to 30 seconds to get the lids off.

But I wanted to take this even further. I put two cans at the ends of a cardboard tube and I put some treats in the tube as well. The inner diameter of the tube is 75 mm (2,95”) and the outer diameter of the can is 74 mm (2,91”), so they barely fit into the tube.

When I put 10 cans with lids into 5 tubes and some treats in the tubes as well, it took Miki 15 minutes to get all the treats out.

I also gave Miki two different cups with lids. It took Miki about 5 minutes to get all the kibble out from these two cups. 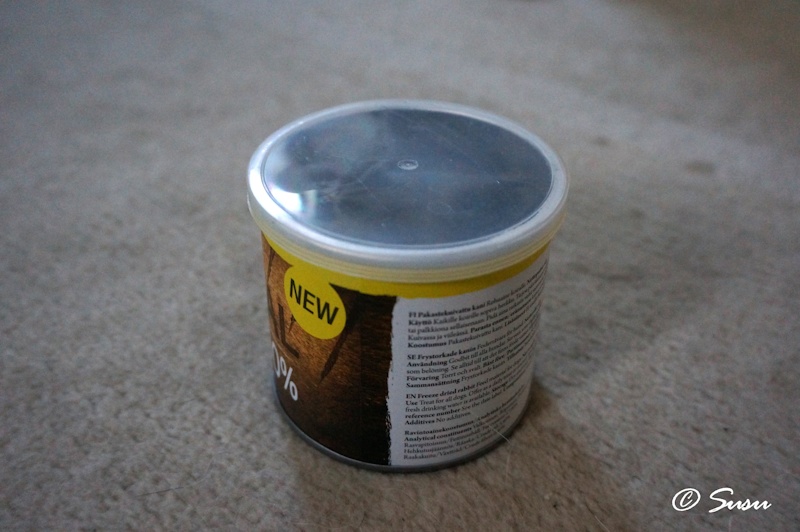 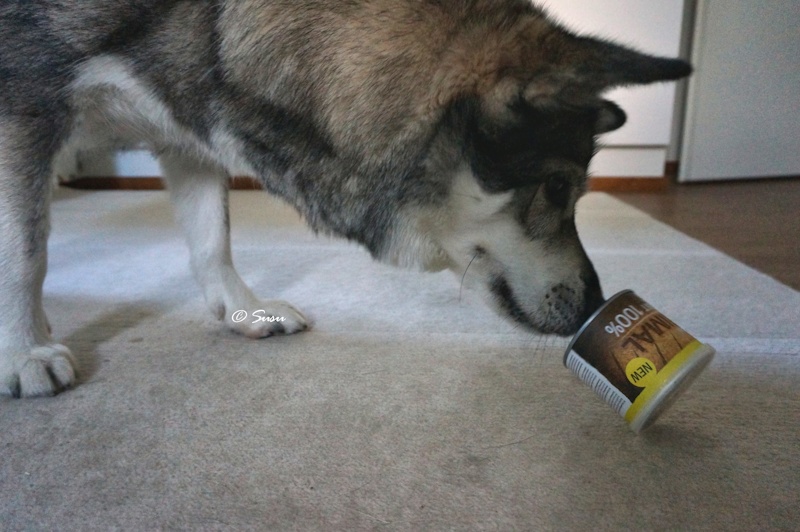 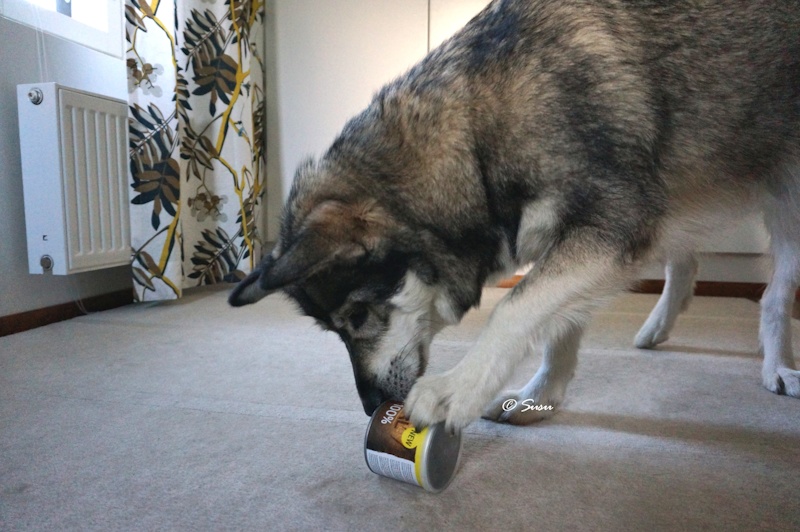 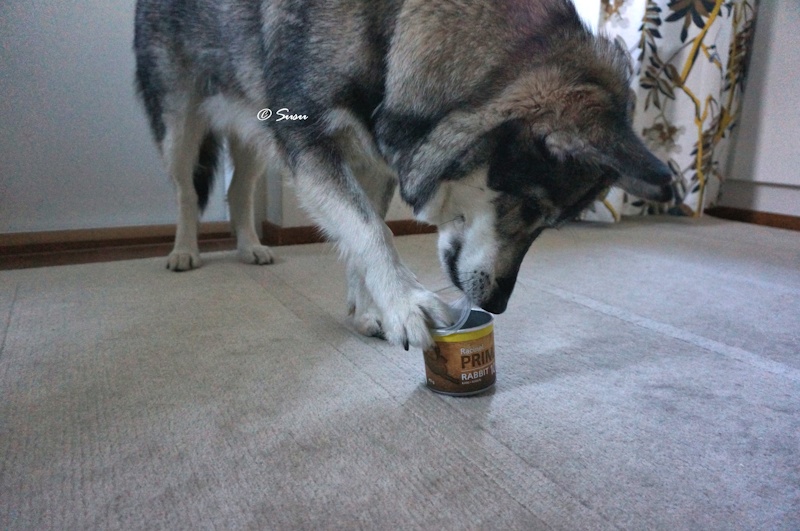 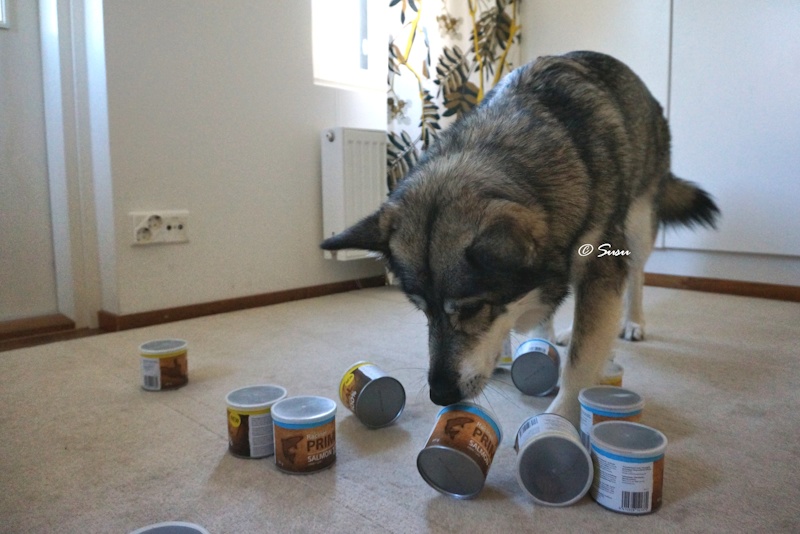 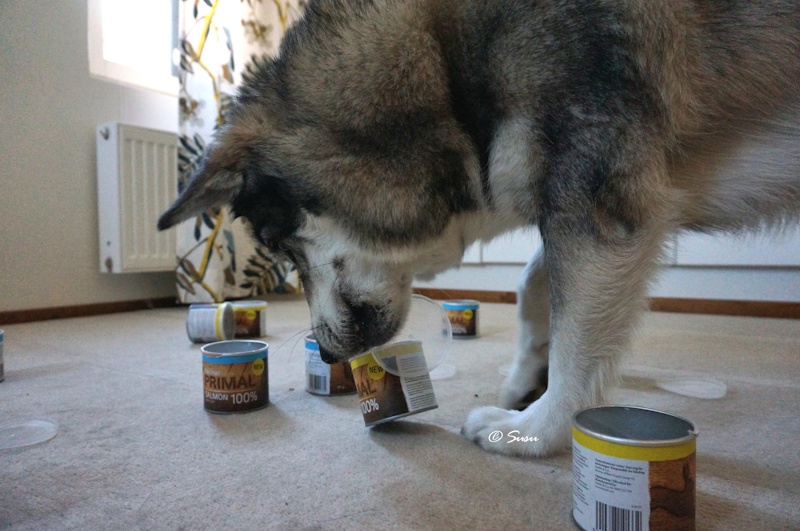 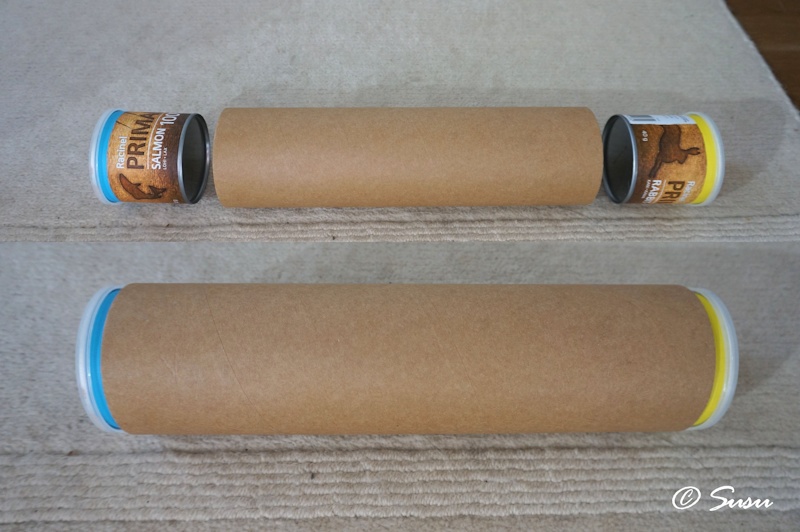 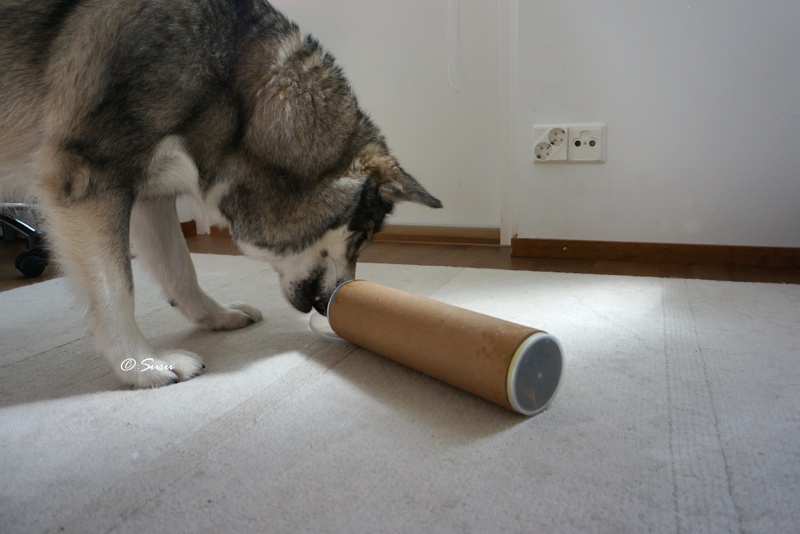 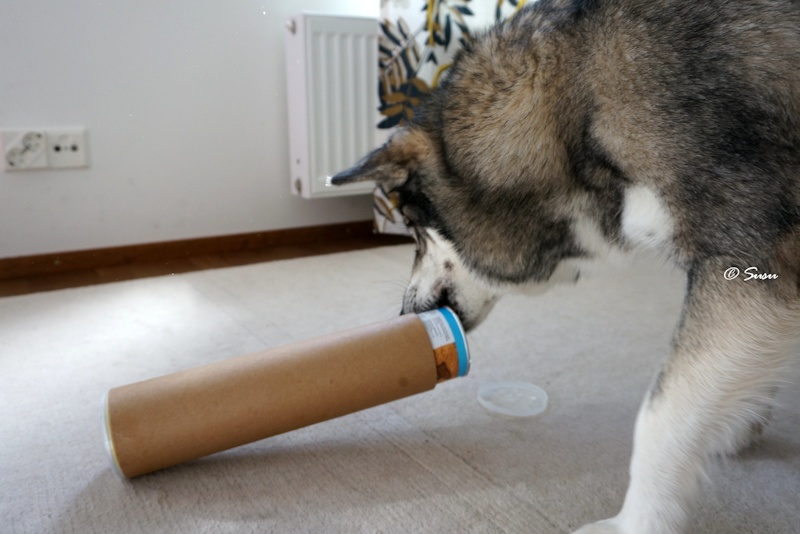 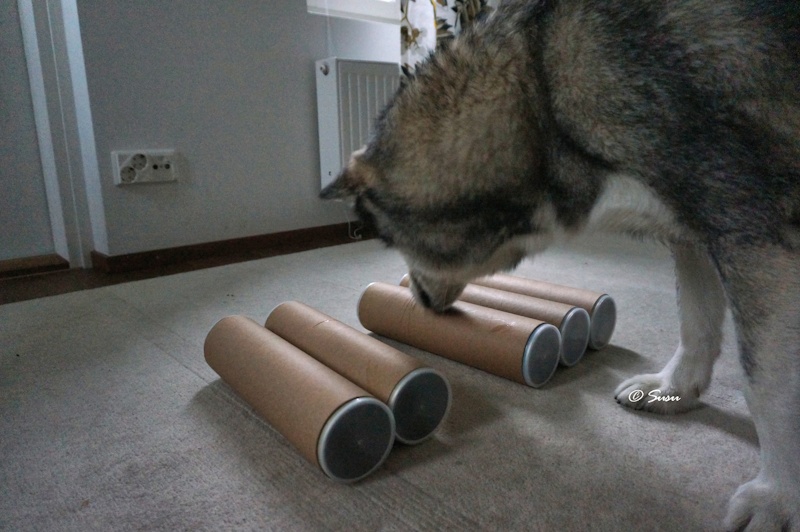 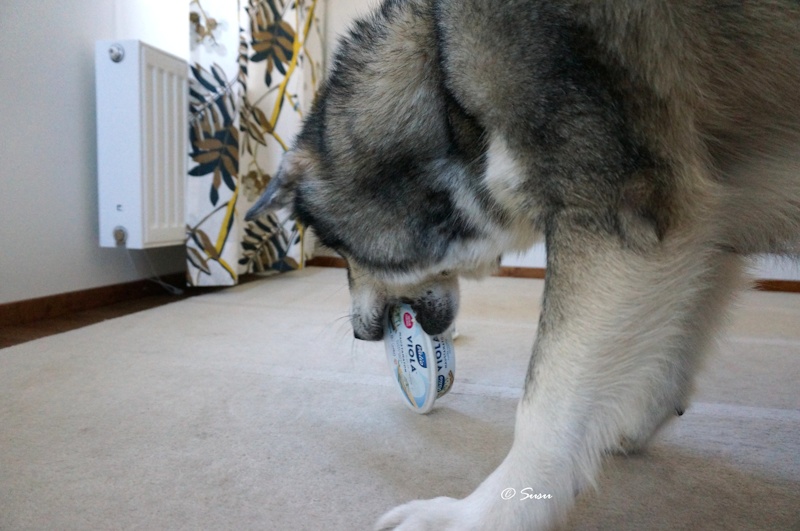 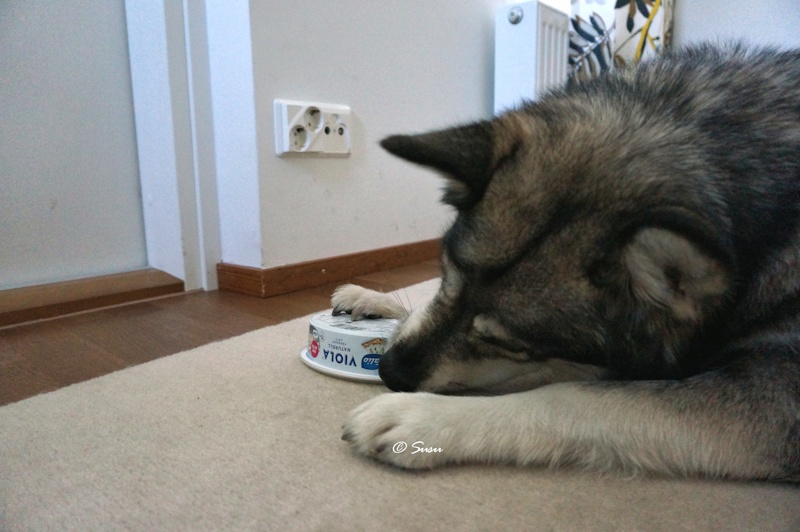 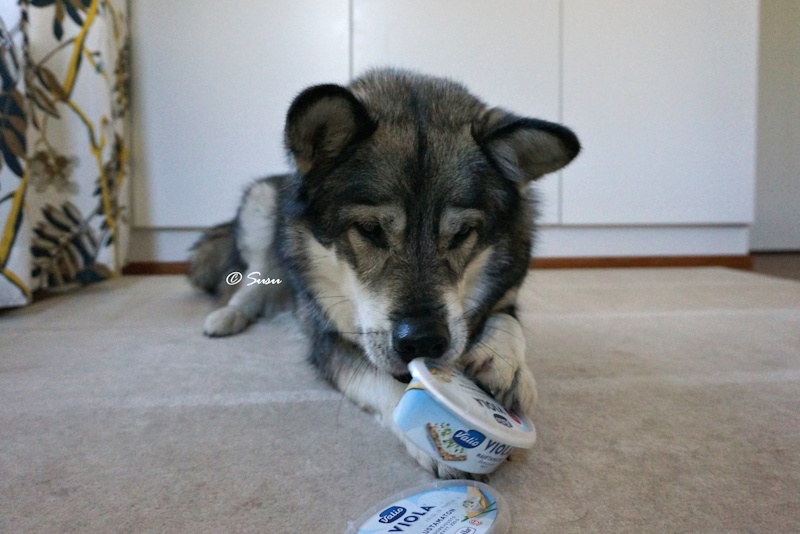 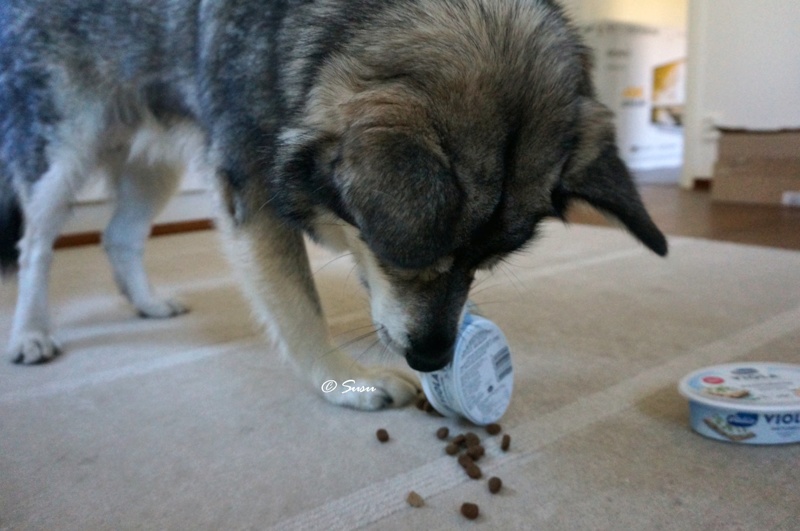